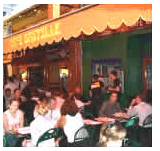 Olivier Azancot and Eric Klein are partners who know how to bring a taste of Europe to San Francisco.  They are long time friends who met in France while they were in a hotel and restaurant program at Ecole Hotelieure. There they learned the refinements of both back of the house and the front of the house of restaurants.

After they graduated, they made their way to San Francisco. Olivier and Eric worked around town before they pooled their talents and opened Café Bastille in 1990 on Belden Place–at the time an alley dotted by garbage cans and today a popular site in San Francisco that feels like the “European Outdoor Dining Experience.”  Café Bastille was so successful that it was followed in 1996 by Plouf which specializes in French seafood fare, B44 in 1999 which is a Catalan Bistro with tantalizing tapas and famous paellas and Voda in 2004 which is a vodka bar that morphs into an entertainment music venue to be enjoyed by its sophisticated patrons. The Belden Place neighborhood has benefitted from these distinct locations each with a different twist on Continental Cuisine.

Olivier and Eric have branched out from Belden Place to other sites and concepts around San Francisco.  Garcon founded in 2003 in the Mission District of the city brings another accessible eatery to the area with Parisian Bistro food. Chouchou in the Forest Hill neighborhood of San Francisco also serves traditional French Bistro food in a relaxed atmosphere.  Their newest addition of Bonbon Patisserie which Restaurant Realty assisted in selling them a few months ago is in the heart of downtown San Francisco and offers traditional French Patisserie favorites including pastries, cakes, and tarts.

Olivier focuses his efforts on the front of the house concerns and public relations while Eric focuses on the back of the house and administrative aspects of their business. Both are talented and well respected restaurant experts who have worked with Restaurant Realty. We wish them continued success on future endeavors.