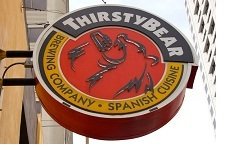 Thirsty Bear Brewing Company, housed in a beautiful historic brick building in San Francisco directly across the street form the Moscone Center and Yerba Buena Center, is one of the most unique brewpubs in the country. The restaurant is the first brewpub in the United States to serve an authentic Spanish menu. Thirsty Bear bears pours a minimum of nine distinctive, premium organic hand-crafted beers and has a full bar with an extensive selection of single malt scotches, a variety of exceptional Spanish brandies and other fine liquors.

This successful concept was created by Ron Silberstein, a former attorney, who had a hobby of brewing craft beers. Ron started brewing in college, took course work at UC Davis and worked at several brewpubs to refine his brewing skills before opening Thirsty Bear in 1996. Ron diligently works the business as a hands on owner operator overseeing all facets of the operation to strive to maintain his goal of making people happy by giving them a quality experience. Ron is concerned about his business’s impact on the planet and consequently became a green certified brewery. We’ve been fortunate to work with Ron on a couple of projects and we wish him continued success in his future endeavors.]