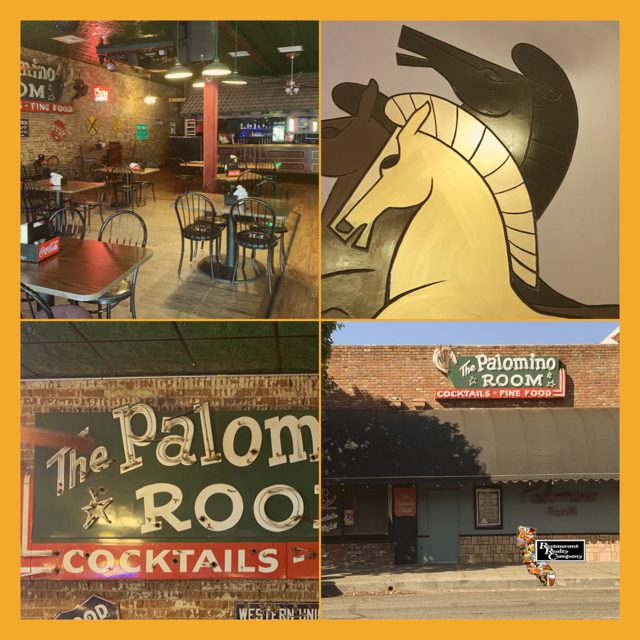 Carlos Zapata just bought the Palomino Room which is more than just another bar & restaurant. It’s a piece of Red Bluff California history.

This is a well established restaurant, bar and catering operation. The bar is a red bluff favorite to locals and tourists alike with 18 seats at the bar rail and another 35 seats in lounge area. Six large tv’s make for a sports bar experience. Complete with a pool table. The giant golden horses sculpted into concrete by a bottle opener decades ago still gallop on the wall. The same hand carved the horse heads decorating the ends of rafters that still crown the bar, although now riding higher above the heads of the crowd. The palomino horse logo prances on Main Street in a historic downtown building walled by original brick. It is underpinned by a deep river rock-and-brick foundation with now-blocked tunnels leading out of the basement rooms.

Red-cushioned seats against the wall are still a reminder of the past. They are relics of the 19th century Tremont Hotel, which once stood next door and was torn down in the 1960s. The Palomino Room had expanded in 1990 to take over two adjacent store spaces that have been converted into a dining room. Dinners are served which features linen-covered tables, distressed brick walls and a handsome bar built of doors salvaged from the Tremont Hotel. An upright Tremont door flanks the bar, the wavy glass backed by a light.Upstairs, another room serves as a gathering place for wedding receptions, service clubs and organizations. Unique 5- by 7-foot wood pieces hang on the wall, one made of a flume and the other of an old water mill.

The transaction was completed by Jim Pate of Restaurant Realty, and we highly look forward to seeing the success of Palomino Room into the next decade led by Carlos Zapata and friends.