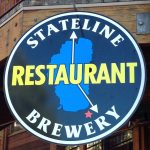 The Stateline Brewery on Lake Tahoe had been in the same ownership for 14 years. With a brand new build out back in 2004 – 2005, Stateline completed its major redevelopment at the Stateline area in the city of South Lake Tahoe.

After a $1 million restaurant build out this 8000 square foot basement Brewery, Bar & Restaurant was open for business in 2005. It was an immediate success under the ownership of Mr. Russell Penn, a seasoned operator in Tahoe. Annual sales reached $4 million in 2010. Then the recession reached this seasonal vacation resort and sales plummeted to $3.2 million by 2015.

With the redevelopment of the Stateline area adding hundreds of luxury
rooms and suites by Marriott Corporation Hotels and Vail Ski resorts building a
high-speed Gondola to the top of Heavenly mountain, many bars and restaurants
were also completed. This neighboring competition meant a slow climb back but
by 2018 annual sales had retuned to $3.5 million.

In January 2018, Russell contact Keith Simpson of Restaurant Realty Company as he wished to test the market and try and sell his beloved business. Two months later in March 2018, Keith had found the successful buyers after many Counteroffers an agreement was reached and the parties finally settled on a price of $1,025 million.

There were many hurdles still ahead. A new lease was needed for the buyers to ensure longevity which led to tough negotiations with the landlord and his attorney. Keith witnessed a master in negotiating skills; his buyer, Tej Sahota, reduced the annual rent by $85,000 and secured a new 25 year lease.
By July 2018, it was the turn of the fire department rejecting the 14 year old kitchen hood and extraction system as being highly out of code. Due to the seasonality of business in Tahoe, the fire department allowed the business to continue for 6 months only. Obtaining the necessary city permits was the next hurdle which took too long to be able to commence the rebuild of the kitchen in 2018. So the shoulder season of April/May 2019 was chosen as the best window. This rebuild cost the seller and landlord $140,000 and was completed by May 30 2019. The Alcoholic Beverage Control took a little longer than usual to transfer the licenses mainly due to the Brewing license, Outdoor permit and Catering license. June 28, 2019 the ABC license transferred and escrow closed.

It was a rollercoaster of a transaction that took many months to complete. I am thankful the buyer’s remained patient, enthusiastic and determined. I am thankful to Bob Porter and his colleagues at Plumas Bank for their efficiency in providing the SBA loan, Judy and Kristine at Old Republic Title for their effortless handling of the escrow process. Above all, I want to thank our buyers, Tej, Suhky & Harpreet, for their tremendous patience and for successfully negotiating a long long lease. Lastly, I want to thank the seller Russell Penn; after 14 years of building a solid, popular business, he can now rest and enjoy semi-retirement.