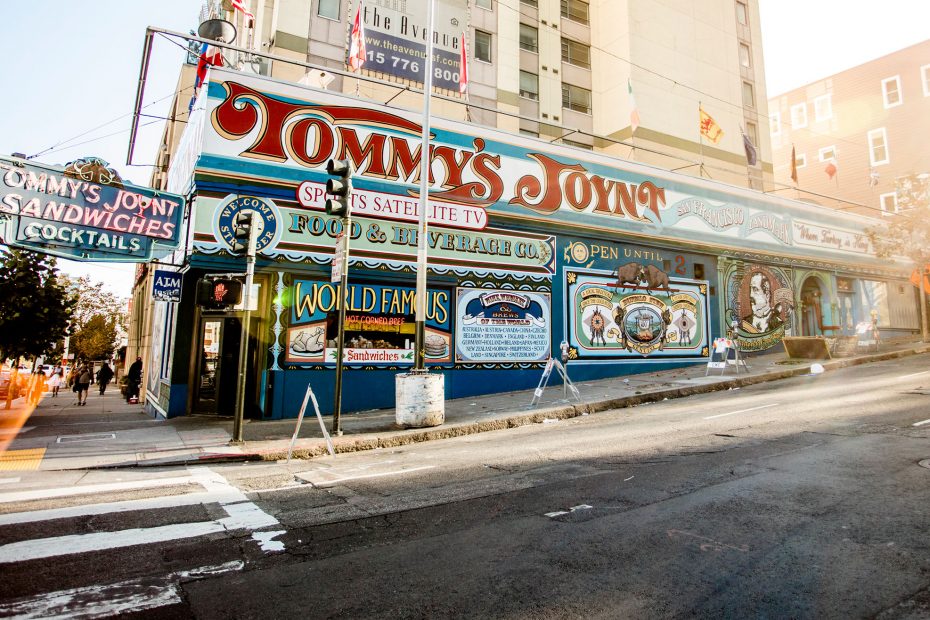 Tommy’s Joynt has been a San Francisco tradition since 1947 and has been owned by the same family since then. Tommy’s was founded in 1947 by Tommy Harris, who as a popular young crooner in the 1930’s on the local radio station, KFRC, eventually moved to NBC. While a radio personality, he co-starred with future legends Morey Amsterdam and Meredith Wilson. a popular local singer. Eventually he left the radio business and settled into San Francisco politics and was a long term San Francisco Parks Commissioner before opening the institution that would bear his name . The business was operated by Susie Katzman, Tommy’s cousin and her sons Sam and Zach until it was recently sold. Prior to Susie running the Joynt it was run by her father Billy Veprin and Al Pollack, a family friend who bought a part of Tommy Harris’s share.

Tommy’s Joynt is one of the most distinctive buildings in San Francisco. The outside of the Original Tommy’s Joynt is covered in a mural, a low building distinguished by the large neon sign and a series of colorful flags evenly spaced along the rooftop. However, the exterior is subtle compared to what you’ll find inside with burgundy walls filled with signs, sport memorabilia, stuffed animal heads, beer steins, photos of famous and not so famous people. A shelf beside the equally cluttered bar displays the more than 100 kinds of beers that are available.

As far as hofbraus go, Tommy’s Joynt is perhaps the best known and most famous, and for good reason: it has a whole lot of character, it hasn’t sold out to attract a younger more affluent crowd, and it has a crazy loyalty among both San Franciscans and those who, whenever they visit, make a point to stop at Tommy’s.

Chris Henry, the new owner, a San Francisco Bay Area native, will keep the tradition alive. Chris promises he’ll change nothing about the popular restaurant, known for its sliced-to-order barbeque brisket, turkey, pastrami, corned beef and roast beef sandwiches as well as its popular buffalo chili and buffalo stew. Chris is a true American success story starting a landscape maintenance business at 12 years old followed up by expanding his business to 50 to 60 accounts while in high school. When he was 18 he started purchasing fixer up homes and then multi residential buildings in California and in other states. He opened his first restaurant , The Barrelhouse, in Sausalito, two years ago and recently opened Dawn Patrol, a breakfast and lunch restaurant, in Santa Barbara. Chris also owns a commercial fishing business as he is strongly committed to the farm to table concept and wants to provide his own fresh fish in his restaurants.

Restaurant Realty is honored to have represented both Susie, the Seller, and Chris, the Buyer, in selling both the business and building. We wish Susie best wishes in her well deserved retirement and wish Chris continued success in all of his future endeavors and in particular overseeing a San Francisco tradition.